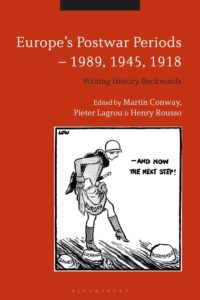 The study of the postwar periods or the aftermath of war has flourished recently, with historians examining how European societies and individuals ‘got out of war’ politically, socially and culturally (Audoin-Rouzeau & Pro- chasson). Europe’s Postwar Periods is a welcome addition to this scholarship. It is based on a series of workshops organised between 2004 and 2009 involving European historians interested in the legacy of traumatic events on the present. The authors seek to write the history of the postwar periods backwards from 1989, using a ‘regressive methodology’. As Henry Rousso notes in the preface, the aim is to promote the ‘Europeanization’ of contemporary histories, ‘against historiographical traditions which stress either national singularities or a teleological view of the history of Europe’ (p. vii). Other goals, according to Martin Conway, are ‘to confront quite directly the nature of the European present’, to move towards an ‘anti-narrative’ history (p. 2-3) and ‘to contribute to the necessary rejuvenation of thinking about the European history of the twentieth century, its shape, periodization and frontiers’ (p. 5-6).

Each of the nine chapters (outlined below) comprises an essay on a wider theme central to twentieth-century European history, used as a lens through which to examine these periods and the notion of ‘postwar’. Unsurprisingly, the chronological contours of each period shift depending on the theme studied (which the editors note in the conclusion), with certain chapters considering just a few years beyond the specific dates of 1989, 1945 and 1918, but others covering the period from 1918 to the present day. Yet whatever the periodisation provided, all chapters underline the messy, slow process of exiting war. They also all remain pan-European, considering Eastern and Western experiences, and involve considerable comparison between the different postwar moments; thus comparison replaces a teleological narrative.

Conway acknowledges potential criticisms of this approach (such as the focus on too-famous dates, or treating the World Wars as unitary events) as well as of the claim that 1989 represented a postwar period. Many authors nevertheless offer an explanation of why 1989 is a legitimate postwar period and starting point for reflection. This is somewhat repetitive but the result is a convincing aggregate argument: for many of the themes examined, clear shifts took place after 1989 in a way comparable to, if distinct from, previous postwar periods.

John Horne’s chapter makes the compelling case that a demobilisation process did occur in the East and the West after the Cold War, ‘albeit one in which the military aspect took a second place to the economy, politics and culture’ (p. 12). The difference was that no former enemy existed (as after 1918) and no new enemy replaced it (as after 1945). Horne concludes that peace, born of a set of common European frameworks, emerged indirectly from reconciliation in all postwar periods, but also that ‘The most persistent failure across all three postwar periods was the inability to guarantee minority rights’ (p. 25).

Dariusz Stola examines the movement of state borders and peoples, a phenomenon present during all three periods, albeit mainly affecting Central and Eastern Europe. For him, ‘the wave of many millions of European refugees, “forced repatriates” and other displaced persons that marked the post-1989 period had no precedent unrelated to war’ (p. 34). He provides considerable detail on population movements and the shifting map of Europe, noting for example that the fortified borders of Soviet Europe from the 1940s ‘marked the beginning of a period of probably the lowest international mobility in Eastern European history’ (p. 41). However, the regressive approach is not always an easy fit here, as the chapter’s focus is predominantly on the post-1989 period.

Guillaume Mouralis and Annette Weinke consider ‘post-war justice moments’ (p. 56). For them, justice in each period tended to try to depart from notions developed during the preceding postwar period. Thus former Eastern Bloc populations after 1989 sought an alternative to criminal justice (e.g. committees of enquiry or compensation to perceived victims) to deal with human rights violations under Communism; during and after the Second World War, criminal sanctions against Axis criminals and collaborators who had infringed collective rights became a central feature of justice, but were provisional; and after 1918, inconclusive attempts to prosecute war criminals coincided with the development of international law to create a focus on collective rather than individual rights.

Péter Apor examines the hopes, fears and plans for the future held by state actors, companies, and individuals during each postwar period. After 1989, plans for the future focused mainly on concrete political action like German unification and European integration, not visionary ideologies for the salvation of humanity. In this sense, 1918 and 1945 were more similar to each other, offering wider visions bolstered by considerable state management of societies and economies. This chapter is original, if somewhat too broad in its approach and examples.

Pieter Lagrou offers interesting reflection on the shifting nature of states during these periods, despite considerable overlap with the chapter on borders. He argues that 1989, 1945 and 1918 were moments of destruction for an ancient order of states – but 1989 was not as much a violent rupture as 1918 and 1945, as the discrediting of Communism was the cause, not the consequence, of the defeat of Communist states. Still, state collapses in 1989 came as a total surprise, in 1945 as an embarrassment, with only 1918 seeming to confirm predictions of doom and wishful thinking regarding falling empires and the creation of nation states. Lagrou notes that there was an impetus for democratic states in 1918, authoritarian states in 1940, social states in 1945, and as little state as possible in 1989, all ‘rooted in debates about what had gone wrong in the pre-war decade’ (p. 118).

Martin Conway asks whether the pervasive understanding of democracy as a forward-moving process makes for good history; instead, we should consider discontinuities and jump-starts. In these postwar ‘Democratic Eras’, democracy emerged due to the demise of alternative models of state rule and political organisation, providing the most flexible means of delivering regime durability. From 1989 until the financial crisis of 2008, the democracy emerging in Eastern and Western Europe was above all neo-liberal and focused on European integration. The form that emerged in Western Europe after 1945 was the ‘democracy of the relatively powerful’ (p. 128), defining itself against Communism. 1918 represented ‘Europe’s twentieth-century republican moment’, with an expansion of the franchise, referenda to decide national borders etc. – but this was ‘challenged by more horizontal forms of democratic community, which followed in the violent political cultures generated by war, defeat and the collapse of state authority’ (p. 131). Conway concludes that reading history backwards allows us to see ‘how regimes and movements which the conventional political lexicon places outside of democracy also contain democracy’ (p. 133), such as Nazism or Stalinism.

Malika Rahal’s chapter underlines how the three postwar moments were quite the opposite outside of Europe. After 1989, there was no change in Asia; in Africa, by 1994, 35 sub-Saharan counties had undergone some form of regime change, but there was also the Algerian Civil War, genocide in Rwanda, and the Great African War (1998-2003) with its 3.5-5.4 million casualties. Post-1945 was the era of decolonisation, sometimes violent, sometimes peaceful, setting the stage for strong regimes born of independence that collapsed after 1989. After 1918, World War I morphed into violent colonial conquest, and as with after 1945, the colonial sphere became an outlet to manage transitions to peace.

Paolo Capuzzo argues against a triumphal narrative of the affirmation of the market economy and of the American model of a mass consumer society, accompanied by increasing European economic integration. For consumer policies, there was no strict linkage between the post-1989 and post-1945 periods, but there was between the post-1945 and post-1918 periods. For the Soviets, post-1945 recovery was based on the socialist management of consumption borne out by the 1917 Revolution; for West Europeans, the catastrophic results of the first postwar settlement acted as a stimulus to explore new directions after 1945. Ultimately, the European market broke apart after 1918, and the subsequent two postwar arrangements can be seen as successful attempts to reconstruct a united European market. Yet ‘This cannot be seen as some form of teleological development since the different steps in this process occurred in the changing contexts of global capitalism’ (p. 175).

Finally, Péter Apor and Henry Rousso engage with the question of whether identifying post-1989 as a postwar period takes into account ways different European countries have dealt with the past in the last two decades. They argue that the pre-1989 past is represented in former Communist countries via tragic and gloomy visions, irony, but also as the object of nostalgia – an attempt to produce a temporal distance between the present and this past. The section on post-1945 outlines the familiar story of oblivion vs. national myths in the 1950s-60s, and an obsession with the Nazi past and the Holocaust since the 1970s, which later influ- enced the need to cope with the Communist past. Before this, the ‘remembrance of the First World War changed or even created what could be seen as a modern model of commemoration’ (p. 188), but this ‘unachieved memory’ was cut short by the Second World War. The authors conclude that ‘war and postwar period[s] change the perception of the past, deeply modify the writing of history as a whole as well as the writing of national histories’ (p. 190).

Overall, the book covers a lot of ground, but there are frequent overlaps between chapters. To their credit, the editors are conscious of potential (valid) criticisms, such as the fact that almost all authors are male and white, the Eurocentric approach, or the flexible, contrasting interpretations of postwar periods presented. Beyond this, at times chapters suffer from a combination of a broad approach and necessary brevity, leaving the reader wishing for more detailed examples. Yet the editors rightly deflect some criticism by stating that the work represents just a first foray into a potentially new way of doing history. In practice, this interesting intellectual exercise does not entirely represent a revolutionary departure from certain historical methodologies, with its emphasis on comparison over cause and effect – and certain sections read more like analyses of effects then causes. Despite this, it is a worthy attempt, and the book offers a series of thought-provoking essays, a strong starting point for considering 1989 as a postwar moment. ❚