World War II in Andre. Makine’s Historiographic Metafiction. “No One is Forgotten, Nothing is Forgotten.” 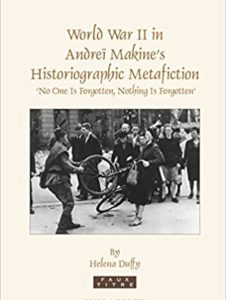 The title of this book includes the well-known line from Olga Berggolts’s poem – “No one is forgotten, nothing is forgotten” – that is carved out on the Memorial Wall at Saint Petersburg’s Piskarevskoye Cemetery. However, Helena Duffy argues that this phrase, promising that those who perished during the siege of Leningrad will not be forgotten, cannot be taken at face value. Indeed, the heroic myth of the Great Fatherland War, constructed and drummed into citizens by the Soviet regime, occluded the experience of Jews, civilians – especially women –, and war invalids who quite visibly jarred with the triumphant grand narrative of victory over Nazi Germany.

It is precisely this kind of grand narrative which post-modernism has challenged, offering new interpretations and micro-narratives that undermine monolithic myth. However, as Duffy magisterially shows, the historiographic metafiction of Andreï Makine has a very problematic relationship with postmodernism as theorised by Linda Hutcheon, Hayden Murphy and others. In his novels, the Franco-Russian author appears to give voice to those previously silenced or traduced, for example the war invalid, in Confession d’un porte-drapeau déchu, the Jew, in Requiem pour l’Est, and the blokadnik, in L’Homme inconnu. Thus far, Makine seems to contribute to the iconoclastic exhumation of ugly vestiges of the past which began in the final years of the USSR, notably with the non-fiction of Svetlana Alexievich. However, the theoretically astute close readings by Duffy demonstrate that these problematic characters and stories from the Great Fatherland War are eventually folded back into the Soviet grand narrative. The mutilated war veteran becomes like a damaged ancient statue, a vestige of a glorious past. Makine’s world-view is infused with an unreflective nostalgia for the USSR of his childhood and youth, and, in paradoxically postmodernist style, propagates a myth that is, Duffy argues, in tune with the dominant discourse of Putin’s Russia.

Duffy’s book is eloquent and forceful, indignant at the suppression of “inconvenient truths” (p. 287). Makine emerges from it as a traitor to both postmodernism and the memory of Soviet history’s victims. However, her thesis can be contested on various levels. Facts – if, despite post-modernism, we accept that they exist – must be respected scrupulously by the author as well as the object of study: the Nazi-Soviet Pact was signed in 1939, not 1938; Khrushchev’s secret speech was in 1956, not 1965. “History from below” is not an invention of postmodernism: it was the mantra of British communist historians, notably Eric Hobsbawm, and of Popular Front novelists internationally. Jay Winter and other memory scholars have shown the role of associations and individuals in the struggle for silenced voices to be heard. Challenges to historical myths about the world wars are not limited to the post-Soviet space: the myth of the “good” Wehrmacht (as opposed to the “evil” Waffen SS) has been debunked, while the behaviour of western allied troops towards civilian populations, notably the widespread practice of rape, has come under scrutiny. Indeed, it is unconvincing to claim, as the author does, that mass rape by the Red Army might be explained by the influence of Asiatic culture: women have been the booty of war throughout human history. Is it not possible to confront painful truths, in fiction and non-fiction, while also saluting courage and heroism in combat or under siege? An intriguing question is raised by the book’s polemical conclusion: why, despite his evident Soviet nostalgia, is Makine so neglected in the country of his birth? ❚